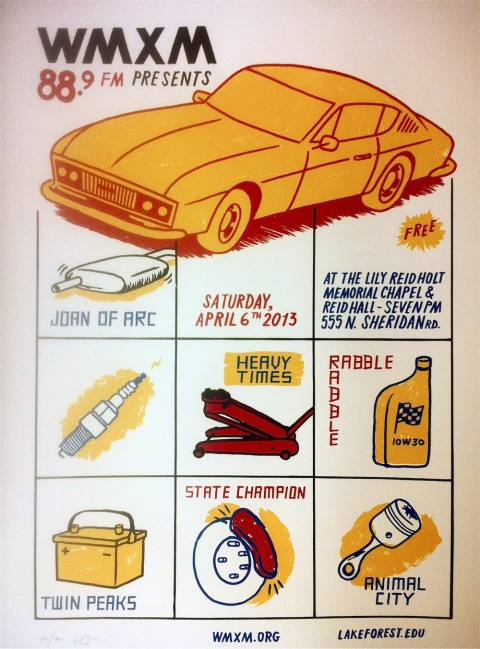 WMXM Presents: A WMXM Music Festival Saturday, April 6, 2013 at Lily Reid Holt Memorial Chapel on the campus of Lake Forest College.
WMXM is excited to welcome back psychedelic troublemakers Rabble Rabble, pop-punk powerhouse Animal City, and the noise-pop neurotics of Heavy Times. Also appearing are out-of-towners State Champion and local youngsters Twin Peaks, whose glam-rock stylings have caught the attention of some of the top critics in the country. Topping off the night will be one of Chicago’s most prized possessions, JOAN OF ARC, a band that has deep roots in indie rock scenes all over the country, and a very special to-be-announced headliner.

Join us at Lily Reid Holt Memorial Chapel on Lake Forest College’s campus Saturday, April 6th, 2013 for an experience unlike anything else. WMXM Presents: A WMXM Festival is FREE and OPEN TO THE PUBLIC.

Broadcasting out of Lake Forest College in Lake Forest, IL, WMXM (88.9 FM) has been on the air since 1975. While the station has a long history of bringing some of the best bands in independent music to the campus, this two-stage event is the first of its kind.