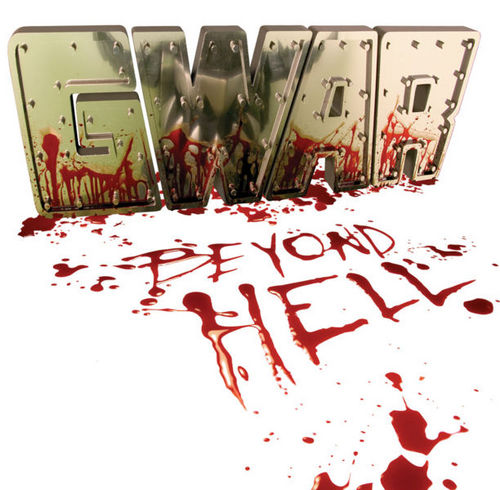 I listen to this album often enough that I feel compelled to tell WMXM about it in detail.

If you’re unfamiliar with GWAR, do a quick image search for ‘Oderus Urungus’ and we’ll be pretty much on the same page. Done? Ok.

From the costumes you could probably guess that GWAR’s schtick is to perform in character as the nastiest aliens in the universe, banished to the most boring planet, Earth.
Considering the medium, it seems plausible that GWAR would make concept albums work more often than most bands. This album would be consistent with that. Beyond Hell begins with GWAR’s fortress/temple being attacked (in the live performance the attacker is revealed to be the Nazi Pope, who hates GWAR) while the band is sleeping off a collective hangover. Caught off guard, GWAR is forced to abandon their castle and escape through the cave system below. Thus ends the first track. The second song describes GWAR getting lost in the underground caverns only to discover a mythical creature, Jitler (a composite of Jesus Christ and Adolf Hitler merged at the butt), who offers to lead them the rest of the way to the gates of Hell. The band agrees out of sheer boredom. The following bulk of the album is comprised of songs regarding GWAR’s battles with various demons, ending in the band barging down the final door to Satan’s quarters. Said demons include Hell’s police officer (a corrupt cop manifest as a pig-demon), a demonic incarnation of deceased (and fictional) junkie/rockstar Toe E. Namel, and GWAR’s ultimate fan, who has committed suicide in order to follow GWAR and pester them further. The final track, “Back in Crack” summarizes GWAR’s defeat of the denizens of Hell, their return to the surface, and their reunion with manager Sleazy P. Martini (“Sleazy sent over a 9-ton crack boulder // He said ‘Way to go, welcome back to the world!'”), as well as their apathy regarding the entire adventure (“If anything I have gained nothing, except just for staying alive // and I suppose that is something, when you’ve tried as hard as me to die”).

As a bonus, there’s a cover of Alice Cooper’s “School’s Out” at the end, with added lyrics that I can’t bring myself to spoil.

This album has suffered criticism seemingly on the basis that it is, in fact, a concept album. I can’t imagine why. To have a band comprised of character-musicians is practically begging for a context in which concept albums are not only more conductive to the medium but nearly necessary. Characters work best in stories. It matters little if they play guitar all the while. Regardless of any weaknesses that the concept album medium allegedly necessitates, Beyond Hell contains some of my favorite GWAR tracks. The band’s apparent inability to take itself seriously manifests immediately in “War is All We Know”: “When I said I loved war, I lied, // it fucking sucks on the losing side! // and speaking of which, my face is on fire”. In this sense, Beyond Hell accomplishes precisely the opposite of the goal of most consequences and by extension what presumably causes them to suffer. Rather than attempting to compress a convoluted story* into the space of a typical album, GWAR writes the soundtrack to a goofy B-movie for the stage. And it is excellent.

The tone of this album is largely consistent, though elements such as the use of a choir appears from time to time (most notably in “Tormentor” and “Go to Hell!”), presumably to enhance the scale of the story (they are killing the devil for fun).

This band and this album in particular are a lot of fun, and the moment you realize GWAR is made up of talented metal musicians hits you like a ton of bricks. Give this album a listen if you’ve had that moment. If you haven’t, listen anyway. Give it time.