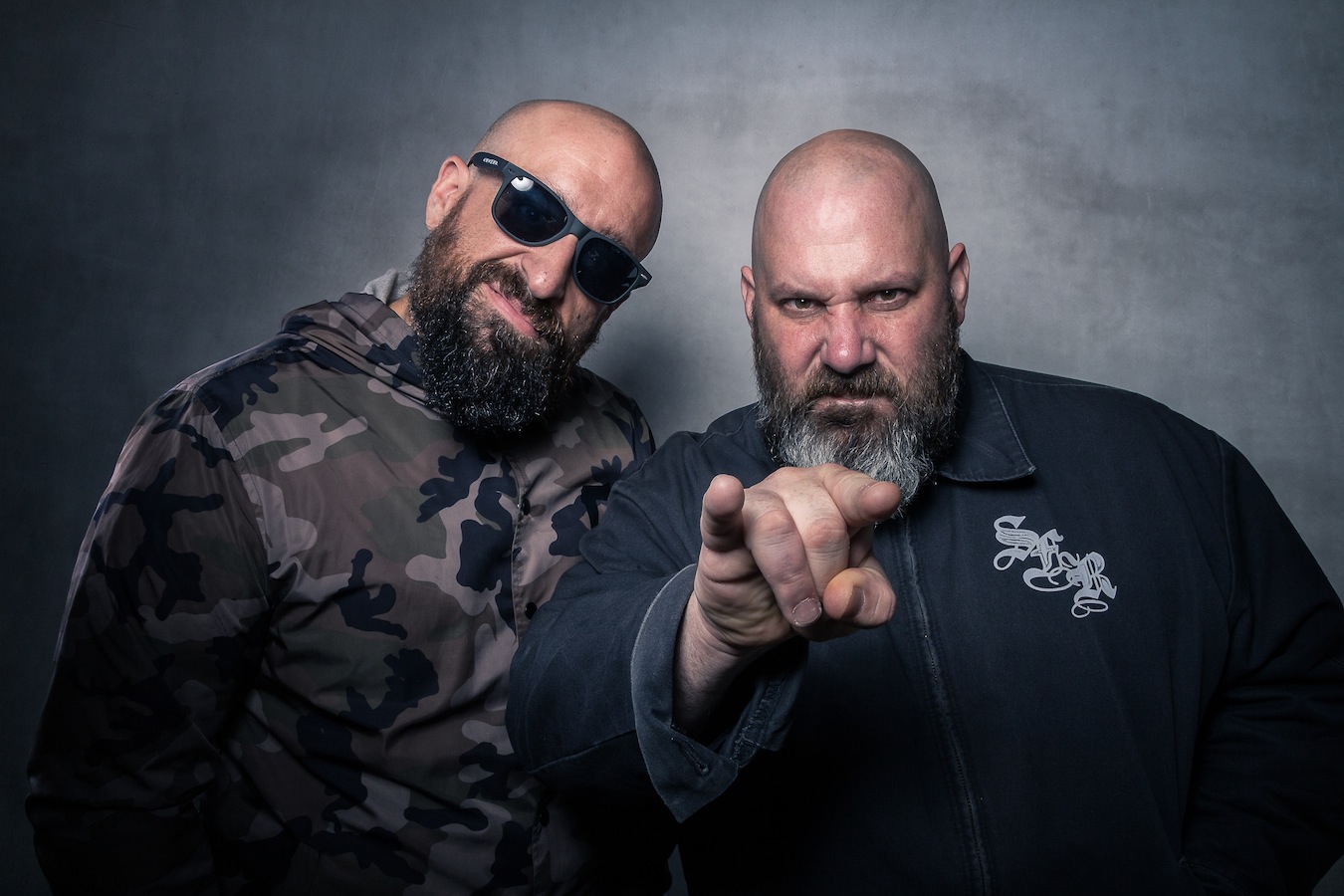 Hailing all the way from Rhode Island, rap duo Epic Beard Men performed at SoundSet Festival 2019 for the first time in ten years. We caught up with them after their set on Sunday, here’s what they had to say:

WMXM: Tell me about how you each started making music individually, and how you eventually started working together on music?

Sage Francis: I started recording in my bedroom when I was a little kid, on my tape recorder.

SF: and my mom lives in Cocoa Beach, Florida. Just like your shirt! Ron Jon. She’s very excited about Ron Jon, my mom. She’s like “Hey, you wanna go to Ron Jon?” and I’m like, “No, cause I don’t surf, I have no interest in it.”

SF: So yeah I did that right up until college, and then I was recording just on four tracks on that point in college, a band reached out to me, and was like “Hey we heard you on the radio” cause I had a college radio show and I rapped all the time to promote myself, and they were like “let’s record stuff” but I was like “I don’t wanna record with a band, I’m a rapper” but it worked out we ended up coming up with routines that sounded cool enough. it worked out we started doing shows together, started building a local following, but it felt very restricted because having a band, especially in Rhode Island, you’re not gonna be able to expand outside of that little area. and then other sample bass producers started getting interested in what I was doing, so thats how I started getting my stuff pressed on vinyl, and doing straight up hip hop sh*t that would get sent to college radio, by the time I met B…

BD: I had dropped out of school to start recording myself, I had moved to New York to start performing, I got invited to some Def Jam events and I was like “Oh, that’s it, whatever” so I dropped out of school, spent my first month’s rent on a drum machine, and a laptop, and started learning to track my own vocals, after that initial contact with the music industry, I was convinced that I wasn’t gonna be able to be myself. I was very political, I was very dark at that time, especially, and I knew the music industry structure I walked into, I was like “I can’t navigate this” so I just started to do sh*t myself, which is a long journey that I’m still on, so I moved back to Providence which is where I ran into Francis, who put me in touch with some of those producers he had been working with and they put me out on his label for the first time in 2008, took me on tour for the first time in 2005, kinda showed me the ropes of the whole indie rap sh*t.

SF: So full circle, ten years ago was the first time we played Soundset together in Minneapolis, and it was the first time we played here together so it’s the ten year anniversary of us doin’ this, as the Epic Beard Men, which was not an official group name back then, but a few years ago we came up with it, and then we started putting out official projects under that name, so that’s how we ended up here again, cause we finally released the official album called “This Was Supposed to be Fun”, and we hit up all our Rhymesayers friends, we were like “Hey mother****ers”

SF: We are BACK, ten year anniversary, you better put us on the stage, and that’s what happened.

WMXM: What have you guys been doing in those ten years since you were last here?

BD: …or like f**kin lunatics–thousands of shows, more than ten releases between us in the past ten years, yeah we must have hit ten by now.

WMXM: How do you feel like your two separate sounds sort of come together to make Epic Beard Men?

BD: I thought I was the strategy. We’re both very violent.

WMXM: If you would indulge me, were there other names on the table besides Epic Beard Men? Or was it the first one?

BD: We had no name for ten years and then one name kind of suggested itself and we were both kind of like okay with it, and that was it.

SF: I also have this thing where like, sage Francis is also a wack name, and I like owning that. and making it a cool name if you can. If you can overcome your shitty name–like Francis, itself, my family name, I was always really really embarrassed about it. So I’m gonna own it and make it a thing where I don’t have to be embarrassed or when people say the name Francis, I don’t have to shrink into my shell. So Epic Beard Men, is a shitty enough name where we have to really push ourselves to make sure that it works. So that’s what we did.

BD: I never signed up for any of that but he named me Sue, so here we are.

SF: I mean, The Beatles? F*ck the name Beatles. Bare Naked Ladies? They’re not even ladies, nor naked. The Black Keys? They’re not black by the way, nor are they keys. Two hipsters f**king passing themselves off as black keys. The white stripes are white stripes.

SF: They’re just stripes, they look like stripes. I played a festival with them and I was like wow they really are stripes. Respect to that.

WMXM: How do you feel like the festival has changed or evolved in the last ten years?

BD: It hasn’t changed in a bad way in ten years and I was just telling someone why that is. It’s because we know the people who run this, and it’s the only festival I would think about that’s like yeah it’ll get bigger, but it’ll never become a bad scene, cause you know whose hands it’s in, you know. There are kids here, there’s a f**kin balloon house. And it’s a family picnic. It’s not gonna go there.

SF: It’s not like we’ve really seen the festival though.

WMXM: Yeah, and there’s so much food now. Sweet Martha’s Cookies is here and everything. I just wanna know, at least every year someone seems to cancel every year on the day of, did that happen the first time you guys were here?

BD: No, I think it was the far side and atmosphere headlining that year. I know that it’s happened a couple times the last few years.

WMXM: Yeah, this year and then two years ago.

SF: So you’re like “why did you even invite this dude back he never even gave a reason for canceling”, BUT shame on fans who came here to see him, for knowing what already happened, and for liking his music at all. That’s the tax on wack rap fans. F*ck y’all.

SF: I’ve never heard an uzi vert song. I mean no disrespect, ’cause I don’t know him

SF: …but the name itself, I’m like of course you canceled.

BD: …actually no wait, I confused him with someone else, there are a lot of lil’s out there.

SF: Did you ever play me any of that sh*t? Like, B is the only dude who ever plays me new rap and I’m like wow I hate all of this.

SF: I like ONE Future song because of the beat. Mask Off. I would freak that beat. I’m not gonna totally front, he has a good beat. Does he have more beats like that though?

BD: No, not really

SF: ’cause thats my fucking BEAT right there.

WMXM: If you could sit down to a lunch with anyone in music, dead or alive, past or present, who would it be and why? like who do you wanna talk to?

SF: I’d like to talk to Rick Rubin, and ask him why he thinks that he’s special enough to not really have his hand in actual production during sessions where he’s labeled as a producer and he just nods his head. There are a lot of producers like that, but I want him to be involved with the music. ’cause I f**kin respect that dude, I love what he’s done in music, and I don’t like that he’s taking a backseat to be this guru, yoga f**kin backseat producer.

BD: I guess I’d just ask him to help me explain why the Chili Peppers are good.

BD: Oh wait, a different guy? Alright wait so maybe… I’d kick it with Flood. Flood is an underrated producer. At a certain point a lot of my favorite records are made by Flood. Flood, I don’t know how he feels about hip hop or if he’s ever though about it, but I’d eat lunch with Flood. Flood did uh, PJ Harvey, a bunch of PJ Harvey records, uh, sh*t, the good Smashing Pumpkins records, a bunch of the 90’s–but the electro hip hop beats.

SF: I would probably wanna talk to Moby. I wanna talk about Moby right now. Let’s talk about Moby for a second. Dear Moby: F*ck all the way off. From 1999 until 2019, I’ve been watching you, I know your story, I will not put up with it, f*ck off.

SF: No you didn’t, no he didn’t. He held hands with Moby ONCE.

We want to thank Epic Beard Men for having so much fun with us at Soundset, you can listen to their newest album, “This Was Supposed to Be Fun”, below!