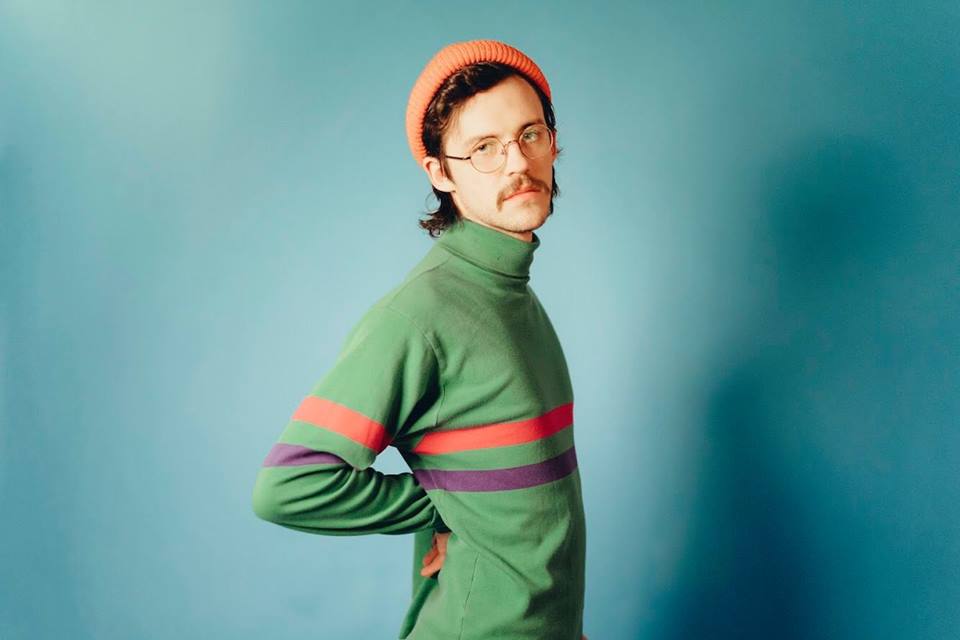 After releasing his new record Flavour, Paul Cherry joined WMXM on April 20th to play the concluding show of his North American tour. We had the chance to ask him all about his changes in sound, upcoming plans, and his goals and influences. 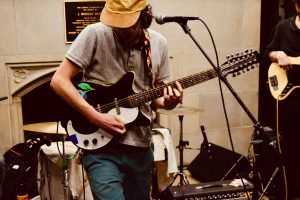 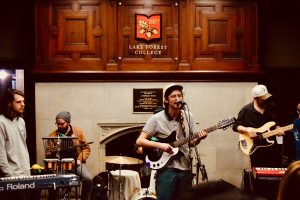 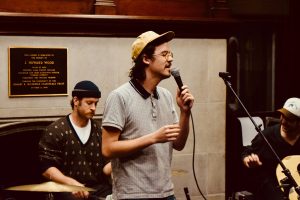 WMXM: How do you feel like your music has transformed from the older garage-rock, dream-pop type of sound to a more jazzy sound? Was this a conscious change?

Paul Cherry: It was absolutely conscious. I didn’t really want to make garage-rock anymore after I made that first tape when I was twenty-one. I was thinking of all of my friends who were really respected musicians who came up and got successful. I had a feeling that garage-rock wasn’t going to be that cool in the greater sense anyway, and I was thinking, “Okay, this is a wave that I jumped on, but it’s winding down and I don’t really want to be a musician who just jumps on different waves,” but I want to carve out what I thought I sounded like. The first tape I made was just like really bedroom-funk-for-funsies – I just made that tape for fun in my house. And then when I found out about the people who were listening to it on SoundCloud, and I saw that one of the songs had like 250,000 plays, I was like, “that’s weird. Now there’s stakes. People are listening.” So, once I realized that people were actually listening to my music, I changed everything and the way I wanted to do what I do now.

WMXM: It didn’t make you unhappy to have to change your sound?

PC: No, it’s cool to change. Growing is good. I think every album I make will sound majorly different from the last. I’m working on another one that’s not too far out from the one that just came out. But I’m still trying to push boundaries, and it’ll always be harder, more challenging, and more groovy. I’m just trying to make nice, fun music.

WMXM: So you see your music changing drastically in the future?

WMXM: You just kind of flow with what gives you more confidence, then?

PC: I guess it’s like, with people listening to your music, the confidence that you get means you can take more risks. I feel like now, I can take many crazy risks because people are already on-board with my music, they’re like, “yeah, we’re fans now, we’ve decided to buy the record and like it.” So, I assume these people will be on-board with what I create next. As long as I know it’s bada** music, I’m going to be risky as hell and try to do weird styles and try to not make the same song ten times in a row.

WMXM: Do you feel most content when you’re moving around doing shows on tour, or when you’re back home in Chicago?

PC: I think I prefer being in Chicago.

WMXM: Do you have any thoughts about the Chicago music scene or DIY Chicago scene?

PC: I think it’s amazing. When I go out on tour, everybody knows about the Chicago music scene, and everybody knows all the bands. Everybody’s mad jealous that we get to live here and be in this scene. It’s a really community-based music scene. There’s obviously haters, but I feel like a lot of the small-scale DIY bands are friends with the bigger bands. It’s a mostly inclusive community.

WMXM: Do you have a writing routine when you want to produce something new? Or something that really gets you into it and gets you motivated?

PC: Yeah, I make YouTube playlists. I created all these playlists that are like inspo-dream board kind of things, and then when I catch a couple hours of a free period, I take a song from my dream board playlist, then I learn the song on the piano or guitar, and then I kind of take the little tricks out of it and I try to re-wrap them into my own package.

WMXM: Do you think there’s any musician that you listen to that might surprise people? Anyone way different from your sound?

PC: I listen to so much pop music, like all Top-40 and whatever’s hot – I listen to all of that. And it’s been a weird thing. People kind of don’t f*** with you if they know you like that kind of music. I’ve listened to so much music, so I was always like, “what have been missing out on? Radio pop.” I’ve been jamming a lot to radio pop lately.

PC: I think I don’t like a lot of it, but I listen to it to try to like it, but I think my favorite is Florida Georgia Line. They’re perfectly horrible and awesome. I’m kind of an FGL fan. I also have been listening to new bands, you know, new music coming up. I feel like people think I would just listen to Hollow Notes or something like that, which I do, but you know, you go through phases, and right now I’m in this pop music phase.

WMXM: Okay, so you’re playing Pitchfork. When is that?

WMXM: Awesome. Now, what are your tattoos of?

PC: One is of my face, and then I have some cherries that kind of look like an ant riding on a bicycle. And then I have a tattoo that’s a very long story. Basically, one of my friends dressed up as a used-car salesman, and so that’s what that one is. My friends all do them, so I’ve never gone to a shop for a tattoo. I’ve never paid for a tattoo, but I do have six s***** tattoos.

WMXM: That’s fair. I know that you mentioned you’re going to Pitchfork, but do you have anything else planned for the year?

PC: Yeah, I’m going on a tour with a band called Post Animal in five weeks. And I’m going to Paris and Turkey with my girlfriend in three days. And then, I’m going to play Pitchfork, and then have a European tour in the fall.

PC: Yeah, and I just got a new booking agent, so I think we’ll be getting booked more and more now.

WMXM: Well you have all these big plans, so thank you for coming to play for us.

PC: Actually, how did you guys find out about my music? Who introduced you?

WMXM: My friend introduced us to your music about two years ago. Another question for you: Vinyl collection, CD collection, or cassette collection?

PC: I have a very large cassette collection, but I don’t ever listen to them. But I do like to collect records that my friends have made, that’s what’s cool to me. Doing trades and stuff.

PC: I played in Baltimore on my first ever Paul Cherry tour last year, and it was in this huge ballroom, and it was to like three people. And last time we played in Toronto, it was really small, but we toured back through those same places and this time, there were lots of people.

WMXM: What are your goals as far as your music goes? What is peak Paul Cherry?

PC: When I don’t have to work at my job anymore, probably. But, my goal is to just chill, ultimately. I want to make all my money making and playing my music. I used to be in a cover band for a long time before I did this, which was great money but it f****** sucked. It was probably the least favorite time of my life, and I quit because I didn’t want to do that. I wanted to do my own music. So, you know, I put this record out, and people like it, so my goal right now is to – every time I’m not on tour, write and finish this next record

PC: Mild High Club. The drummer on my record is the Mild High Club drummer. I went to school with them and watched them grow up. They were just my homies from college. You can probably hear their influence in my music.

WMXM: Awesome. That’s a wrap. Thank you so much.