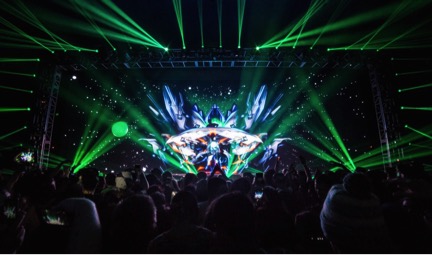 Excision’s Paradox tour featured artists Figure and Bear Grillz as the opening acts. Figure’s set was great. He incorporated his signature style that included extremely heavy dubstep and even threw in some deep house as he was wrapping up. Bear Grillz also had a solid mix and performance as he danced around on stage with his signature bear suit on.

The Rave in Milwaukee showcased back to back nights of one of the EDM community’s most prominent dubstep artists: Excision. The Rave was only supposed to host one of the forty performances The Paradox tour originally announced, but due to popular demand, another show was added. Jeff Abel (aka Excision) brought 150,000 watts of bass to Milwaukee for two nights in a row and some concertgoers even reported having pieces of the ceiling fall on them because of such intense bass vibrations.

The Paradox tour, which features the third revamp to Excisions already impressive stage designs, wowed the crowd with over 50 moving spotlights, color-changing light bars, and an adapting LED stage setup. Abel felt the creation of a stage like the Paradox was necessary for the visual production to keep up with his music. To up the wow-factor of his Paradox stage, Excision also had his opening acts, Figure and Bear Grillz, perform with minimal light and visuals. A giant black tarp covered The Paradox during their sets, so excited fans had to wait until Excision came on to get the fresh and exhilarating experience of this stage.

To say the sense of community and love flowed freely throughout the night is no exaggeration. As far as the eye could see, people were dancing and head banging together, hugging, and just having a good time. During Excision’s set, fans even banded together to lift a man in a wheelchair high above the crowd so he could see the massive stage setup and crowd surf.